As an avid visitor of national parks, I was very excited to check out Acadia National Park in Maine.  From Boston, the national park is about a five hour drive up the coast, although it took my mom and I nearly seven hours because we took back roads instead of the highway.  We also stopped in Freeport, Maine on the way to shop at the original L.L. Bean store and local outlets.

In Freeport, a small town just south of Brunswick, my mom and I first stopped for some lunch at Harraseeket Lunch and Lobster Company to eat our first of many New England lobster rolls.  I’ve had Michigan variations of lobster rolls but none compared to an authentic New England one, which consists of lightly buttered fresh lobster and lettuce on a buttered roll.  It’s simple yet very delicious! 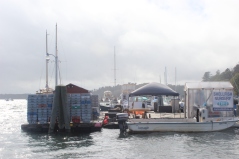 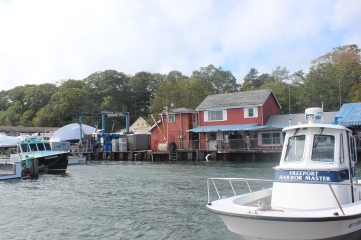 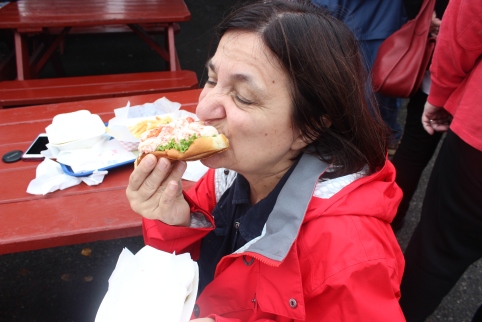 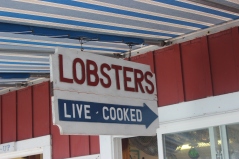 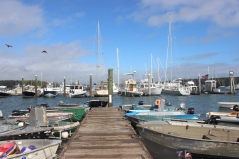 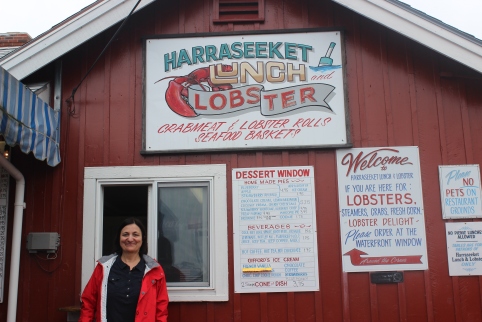 There are many outlets in Freeport as well, although they are very crowded.  Arguably, the most well-known shop is the L.L. Bean Flagship Store, which is open 24 hours, 365 days.  Freeport also has many other outlets, including Patagonia, North Face, Talbots, Orvis, etc.  If you have the time and can navigate the crowds, it’s a fun stop on the way north to Acadia.

Arriving in Acadia, my mom and I checked into our B&B, the Thornhedge Inn, which is located in Bar Harbor and only a stone’s throw to Main Street.  After a hearty Italian meal in town at Mama Dimateo’s (I had the Chicken Saltimbocca while my mom had the Duck Confit–both exceptional), we called it a night went to bed early to rest ourselves before our first day in Acadia.

Although we only did two hikes in Acadia, both were beautiful and offered varied scenery.

The first hike was the Ocean Path.  This is a VERY easy, 2.2 mile walking path along the side of the road, with small pathways that lead to the rocky shore for a more private look of the Maine coast.  Parking is very plentiful if you know where to go.  We parked at Sand Beach, which has a parking lot, bathrooms and a beautiful beach (this beach is not to be overlooked!).  Officially, the trail starts here but you don’t have to start your journey here.  You can park anywhere along the side of the road if you heed to the right.  I noticed many people parking at Thunder Hole, which also has parking, but it’s extremely congested and the views are arguably mediocre to other stops along the path.  We actually skipped this stop and kept going to the Otter Cliffs.  Overall, this was a great introduction to the park but was fairly close to the road and quite congested in certain areas.  Go early in the morning to avoid crowds, as it gets busier as the day goes on. 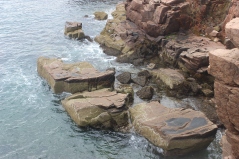 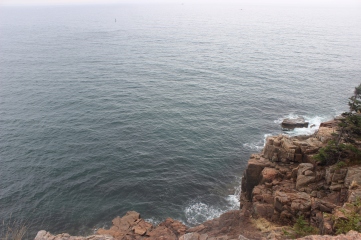 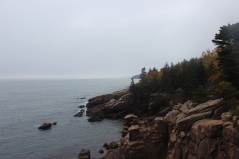 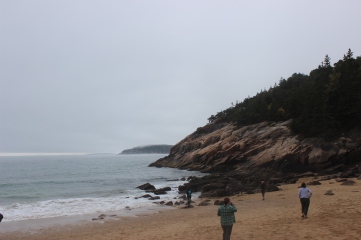 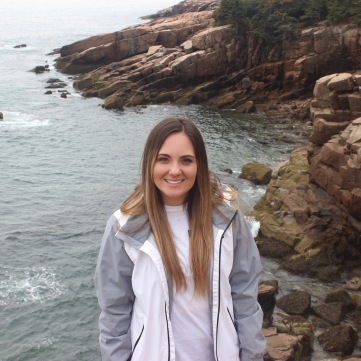 There are two Bubbles hikes, north and south.  Both can easily be done in one day.  Actually, both can easily be done within hours.  As with most “summit” hikes, each hike is heavily uphill for the first half and heavily downhill for the second half.  Because we were short on time, my mom and I did just the South Bubbles hike.  It took about an hour and a half but 30 minutes of that time consisted of a mini photoshoot at the summit.  And although the summit a bit busy, there was almost nobody on the trail hiking with us.  This beautiful hike starts off at the Bubbles parking lot, makes its way through a dense forest and keeps going to rocky summit that gives you views of the Atlantic Ocean, Acadia, and many surrounding lakes and summits.  The parking here is very limited so be warned!  I was lucky enough to track down a person who had just finished the hike and turn my blinker on, “claiming” the spot until they left and I could officially park there.  Some people park at Jordan Pond and hike up but this is quite a ways down the hill and not very convenient.  As with most national parks, the earlier you arrive, the better! 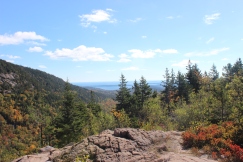 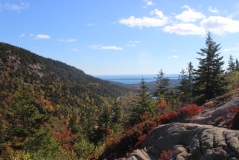 With so many lobster shacks around, you’d think we visited them all.  But in a typical Rymar fashion, we found one lobster shack we loved and didn’t check out any others.  Because it was THAT good.

Beal’s Lobster Pier has to be a highlight of our trip.  From the lobster rolls and the friendly service to the beautiful views of Southwest Harbor, it’s got it all.  On our first visit, the rain forced us to sit inside, although it wasn’t all that bad since we had tiki torches to keep us warm.  Upon finishing our meal, my mom and I wandered the pier and happened across a few of Beal’s workers, who taught us about how lobsters are caught, explained the many obstacles lobster fisherman face  and even let us hold some live lobsters!  Shoutout to these rad guys (forgot your name but I’ll never forget you!), who made our trip even more memorable. 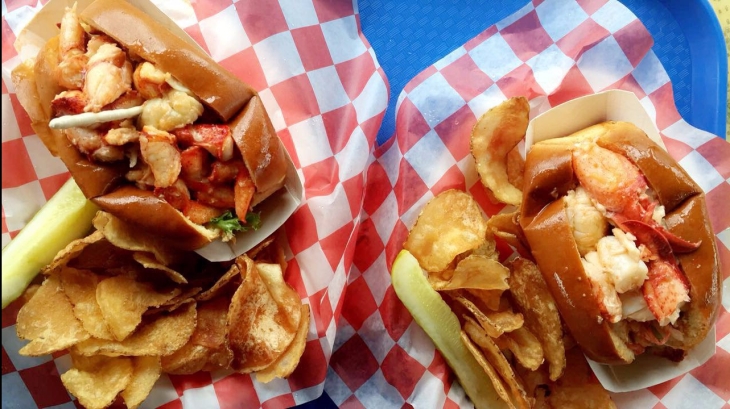 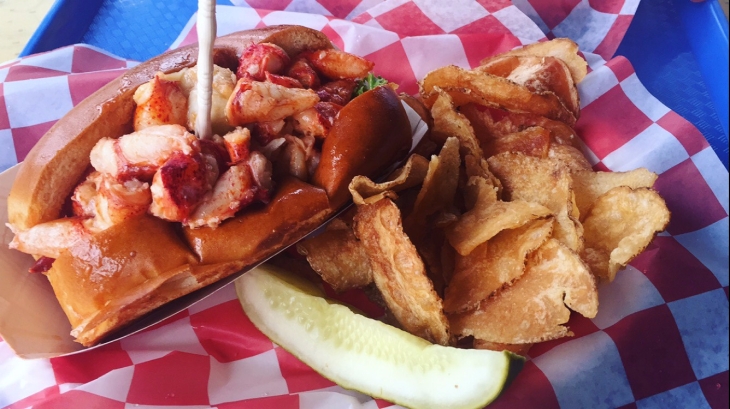 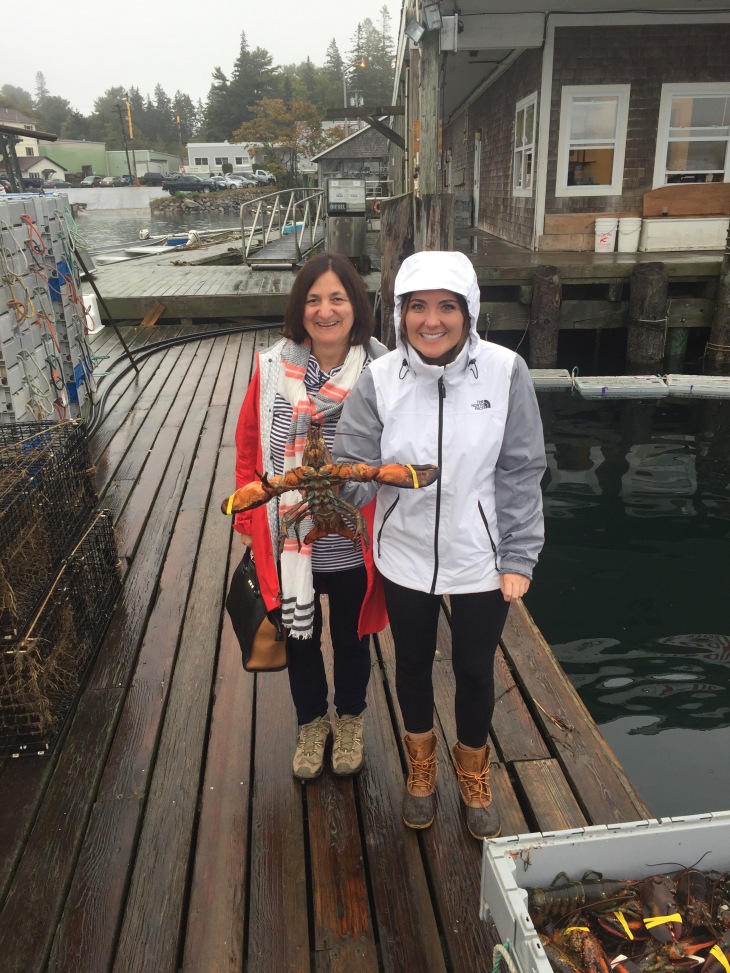 Our second trip to Beal’s was less eventful but just as worth it.  Thankfully, the weather cleared up so we could sit outside and enjoy the views of the harbor.  Both times I ordered a Garlic Lovers Roll (my favorite), while my mom got a Traditional Roll.  There are plenty of other roll options and other lobster favorites, such as steamed pot and lobster burger.  You can also order online and have lobster shipped to anywhere in the US! 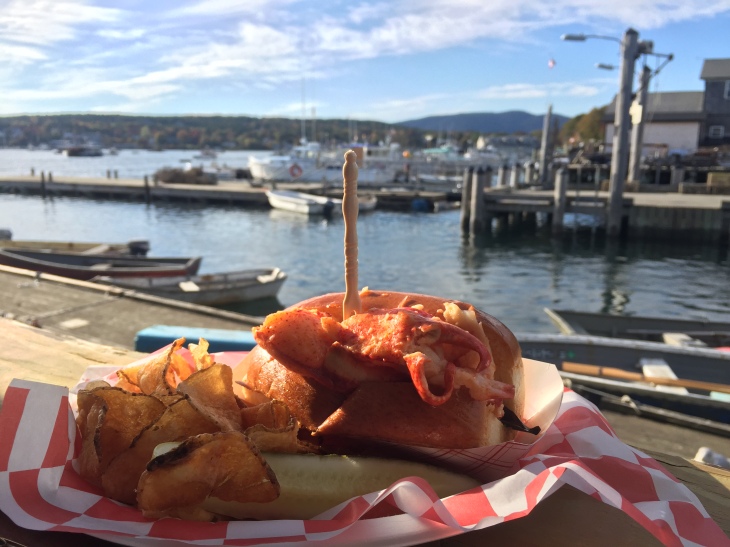 Another highlight of our trip was the Sea Princess Cruise, which gave us a new view of the park–from the water!  The cruise starts out in Northeast Harbor and tours through Some Sounds Fjord, around Bear Island Lighthouse and even makes a quick stop on Little Cranberry Island.  It’s about two and a half hours, but you need to arrive a half hour early (we arrived 5 minutes early and almost didn’t make it…).  We saw plenty of wildlife on the way too, from seals to ospreys, the cruise did not disappoint! 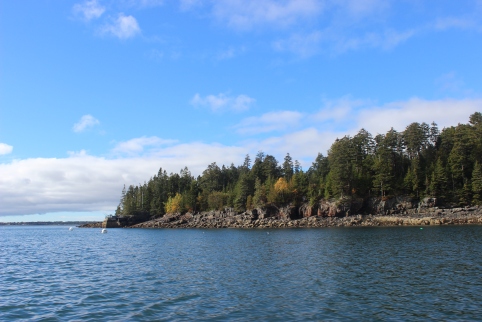 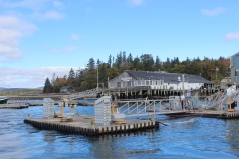 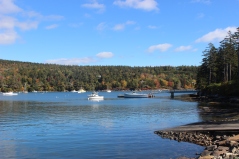 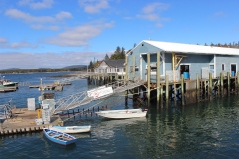 Last but certainly not least on my list of Acadia stops is Bar Harbor.  We stayed in this famed city via our B&B.  Our B&B was conveniently located about a block and a half from Main Street and provided a filling breakfast every morning, along with afternoon wine and cheese.  I also spent nearly every evening before bed in the parlor, which had a homey, Victorian vibe to it.  Nobody else is usually around, since most people seem to go to bed quite early, so I was able to peacefully read books and watch movies in the parlor.  However, I probably should’ve steered clear of scary movies, since I was half a block from a cemetery and the Victorian vibe gets eerie at night (thanks Silence of the Lambs).

Since Main Street was so close, we stocked up on souvenirs and enjoyed local favorites, such as ice cream from Mount Desert Ice Cream (I had night pumpkin flavored ice cream each night, because FALL) and latte’s from Choco-Latte.  Our B&B was also right next to a beautiful but eerie burying ground, which provides some great Halloween-esque shots in the late fall evenings.  HOWEVER, as convenient as Bar Harbor was, it was also definitely a tourist trap.  Next time, I would aim to stay in Northeast Harbor, Southwest Harbor or Seal Harbor, all of which are located deeper in the park and not as busy.

Nevertheless, Acadia National Park made for a wonderful stop on our New England Adventure and I’ll certainly be back to see more of it!